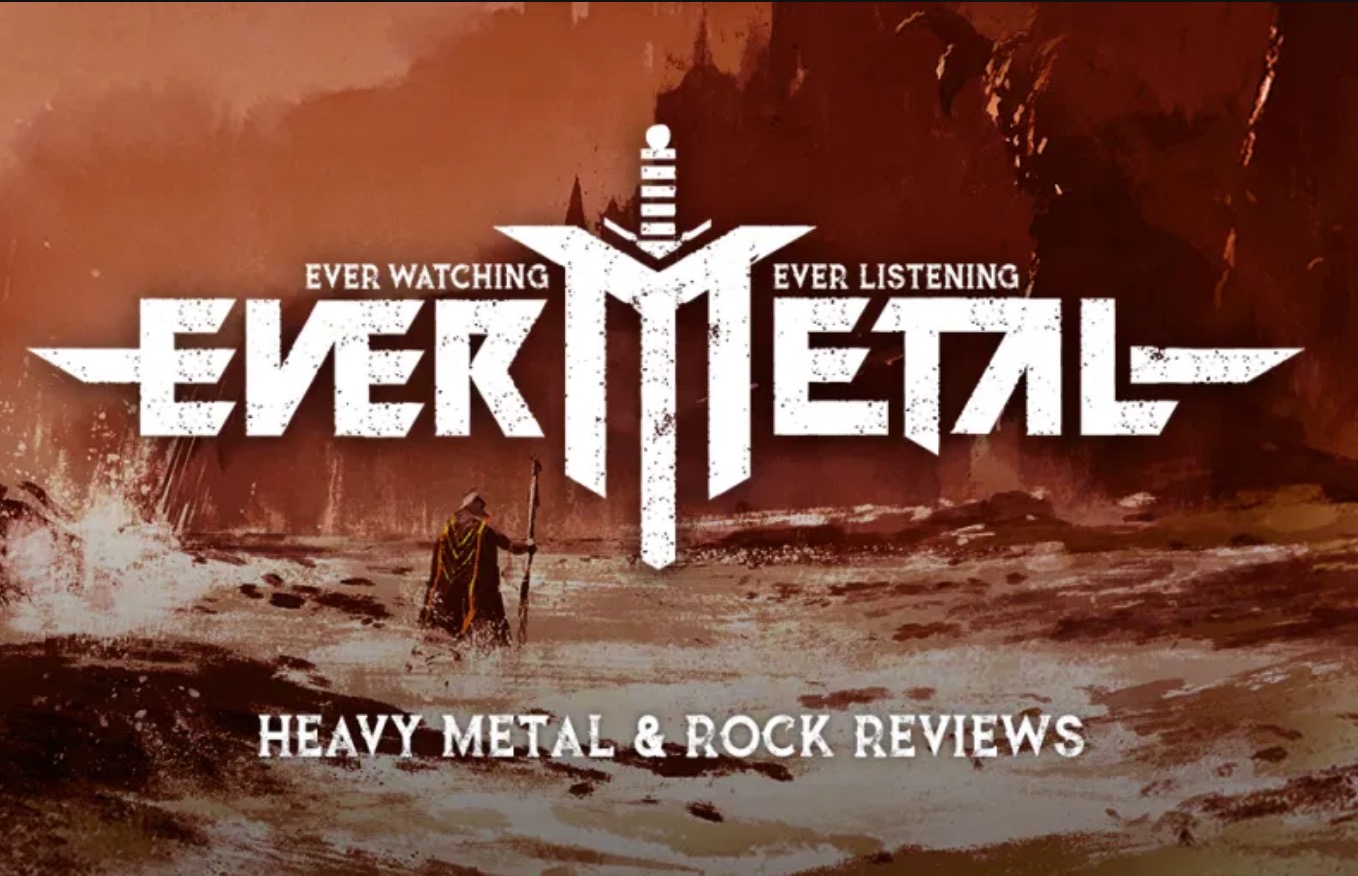 Hi everyone! Welcome to our new EMQ’s interview with Portland, OR based Traditional Heavy Metal project White Crone. Huge thanks to vocalist/multi-instrumentalist Lisa Mann for taking part.

What is your name, what do you play and can you tell us a little bit about the history of the band?

My name is Lisa Mann, I’m a bass player and vocalist, and my traditional metal project is called White Crone.  White Crone isn’t a band; it’s a mostly one-woman recording project. I wrote 11 out of 12 tracks (one being Venom’s Seven Gates of Hell) and played all the bass, and almost all the guitars. Master drum instructor Larry London provided drums on 11 tracks, ex-Sabbath/Dio drummer Vinny Appice guests on a song, ex- Glacier guitarist Mehdi Farjami laid down two killer solos, and percussionist Caton Lyles added texture to a middle-eastern sounding track.

I am a blues artist by trade, but I never lost my deep love of the heavy metal that I grew up with! So for the past few years I’ve been hammering away at this album, “The Poisoner”, in my spare time. With the help of engineer and co-producer Kevin Hahn, finally it has come to fruition!

How did you come up with your band name?

Well, I’m not as young as most female metal artists out there, and I have very pale skin. Voila – White Crone!

What Country/Region are you from and what is the Metal/Rock scene like there?

I am from the Pacific Northwest of the United States, living in Portland Oregon. There is a vibrant heavy metal scene out here, giving birth to bands such as Agalloch, Red Fang and Idle Hands. The metal scene in Portland is like a family, there are even heavy metal meet-up groups that plan gatherings online to hang out before shows, or have mixers at bars that play metal.

What is your latest release? (Album, EP, Single, Video)

The debut album is called “The Poisoner,” and it’s been getting excellent reviews from all over the world!  There is also a full-production video of the title track on my YouTube channel. The video tells the story of The Poisoner, a mysterious character that transcends time and space, delivering deadly retribution on behalf of the downtrodden.

Who have been your greatest influences?

When I was 12 years old, a friend gave me an Iron Maiden album- “Killers”. I had already started playing bass, but that album totally changed my life! I learned to play and sing along with the first five Maiden records, so that band was definitely my biggest influence. But I am also influenced by Mercyful Fate, Judas Priest, Manowar, Celtic Frost, Dio, more recently Ghost (love the proto sound), and of course Black Sabbath. Black Sabbath just celebrated 50 years, 50 years of metal! What a gift to the entire world!

What first got you into music?

My mother played acoustic guitar and sang folk and popular songs. My parents had what would now be called “proto-metal” albums from bands like Deep Purple, Cream and Led Zeppelin. I learned to play along with their bass lines on her acoustic guitar- for some reason; I was always attracted to the sound of the bass!

When I was 11 years old, growing up in Charleston, West Virginia, I saw a violin-shaped Paul McCartney style bass in a pawn shop. That school year, I walked home every single day at lunch, ate some toast or canned beans, to save my lunch money and buy that bass! I was malnourished to get that bass, and my father had no idea I was doing it. By the time I was 19 years old, then living in Portland, I was playing professionally, and I have been ever since.

If you could collaborate with a current band or musician who would it be?

As a youth, I was a huge fan of Ronnie James Dio and his band, especially drummer Vinny Appice. A few years ago, I wrote a prison chain-gang style blues rock song, and in my mind I heard Vinny playing drums. So I googled and cold-called him, sending him examples of my work, asking him to play on that song, ‘Judge a Man Forever’. He said yes! He recorded that song, as well as a song on this album, ‘Under Hag Stones’. So I have already collaborated with one musician that I always dreamed of working with. If there is a guitar player I would love to record with one day, perhaps it’s Tony MacAlpine. He has an absolutely superior sense of melody, and to me, melody is king.

If you could play any festival in the world, which would you choose and why?

Of course Bloodstock, Hellfest, or Wacken would be amazing! However I was recently on the Legendary Rhythm & Blues Cruise and I think it would be great to perform on the 70,000 Tons of Metal Cruise. As an artist, you really have a chance to get up-close and personal with fans and hang out with other musicians on a cruise. Like I said, White Crone is not a band, so there are no plans as yet to perform live. However I have also joined a killer melodic metal band called Splintered Throne as their vocalist. We’re working on a new CD, so perhaps someday we’ll get the chance to perform a metal fest or cruise.

What’s the weirdest gift you have ever received from a fan?

I have a big shelf where I keep all the wonderful gifts I’ve received from blues fans. It’s not necessarily weird, but one fan made a multi-media poster with a cut-out bass guitar made out of leather. It has tuners (6 of course), pickups, a bridge, strings and all. She put a lot of time into it and I cherish it!

If you had one message for your fans, what would it be?

Thank you for listening to the music I worked so hard to create!

If you could bring one rock star back from the dead, who would it be?

Ronnie James Dio.  After he passed, I wept for days. Even still, I sometimes cry when I hear that voice.

What do you enjoy the most about being a musician? And what do you hate?

I am so very blessed to not only hear music in my head, but to be able to reproduce it and allow others to hear it as well. What do I hate? Data entry! Seems like as an independent artist, I’m always copying and pasting song titles and ISRC codes into forms! Ugh.

If you could change one thing about the music industry, what would it be?

The lack of transparency! It used to be easy to find out just how artists are being screwed financially. Bootleg records, bad record deals, a lot could be traced and hopefully remedied. But in the digital age, who knows how much is being made off our music without our knowledge?

Name one of your all-time favourite albums?

“Sad Wings of Destiny” by Judas Priest! I’ve listened to it hundreds of times! I was blessed to have met engineer Chris Tsangarides who worked on that album. I did a few tours as a blues artist in the UK with my guitarist friend Dudley Ross, who was a good friend of Chris’s, and was kind enough to bring me over to spend a long afternoon with him.

For audio quality, CDs or FLAC are best, hands down.

What’s the best gig that you have played to date?

Hard to say! However, my aforementioned guitarist pal Dudley Ross got me a gig at the Half Moon, Putney in London a couple of years ago. To play the same stage where Arthur Crudup, the Rolling Stones and The Who played? Wow, what a rush!

If you weren’t a musician, what else would you be doing?

Maybe a writer or painter! I need to be creative in some capacity.

Which five people would you invite to a dinner party?

What’s next for the project?

I have a few tracks already brewing in the White Crone cauldron and definitely plan to make another album in the future.

What Social Media/Website links do you use to get your music out to people?

My website is;
www.whitecrone.com
People can download “The Poisoner” at;
www.whitecrone.bandcamp.com
Or buy the compact disc through Music Millennium at;
https://musicmillennium.com/UPC/194660281906

You can also find me here:

Jaffa Cakes! Are they a cake or a biscuit?

Whatever they are, I ain’t eating them.

Thank you for your time. Is there anything else that you would like to add?

I very much appreciate this interview- thanks!